Create an Account - Increase your productivity, customize your experience, and engage in information you care about.

The Downtown Community Redevelopment Agency (CRA) is now in the final years of its initial statutory lifespan. Since its beginnings in the 1980s, there has been a dramatic transformation in the physical appearance of the district. View 1987 Downtown Plan (PDF), Maps (PDF), and Amendments (PDF).

In 1996, the CRA, in cooperation with several City departments, completed a major infrastructure improvement project that involved the upgrading and replacement of public water, sewer, storm drainage, and electrical systems and streetscape and paving improvements.

This was followed by what is perhaps the most significant change in the core of the district - the redevelopment of 12-acres of city-owned land lying in the area bounded by Beach Boulevard, 3rd Street, 1st Avenue North, and the Boardwalk. The site now includes:

A Vision for the Future

Building on the progress made during the 1980s and 1990s, the City and its CRA undertook a "visioning" process to provide a guide for the Downtown redevelopment program in the coming years. This citizen-driven planning exercise led to the identification of eight community core values - safety, family-friendly, walkability, small community feeling, open space/ocean views/beach access, entertainment, gathering place, and a mix of uses - that provide the watchwords for the continued development and redevelopment of the central core of the Downtown district.

Even before the Vision Plan was completed and incorporated into the redevelopment plan, the City partnered with the Florida Department of Transportation to remake the eight-block stretch of 3rd Street (S.R. A1A) through the central business district. The project includes landscaped center islands, new street lighting, wider sidewalks, and numerous traffic safety improvements.

In 2010, the City and CRA took a major step in the implementation of the Downtown Vision Plan when they adopted Jacksonville Beach Downtown Streetscape Design Master Plan. Earlier, the CRA purchased several parcels that were vacant or had dilapidated structures that will be used for parking or other redevelopment-related uses in the future. 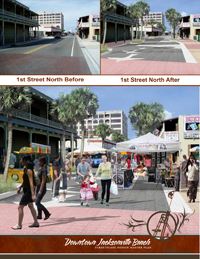